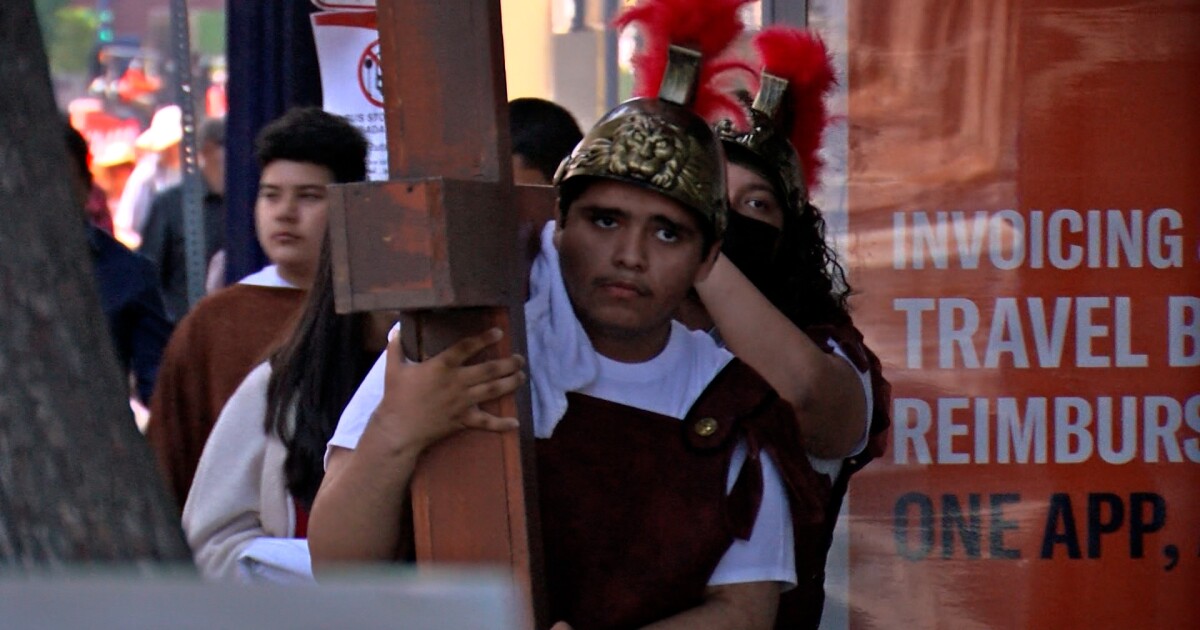 The spring air on the top of Mount Helix was filled on Friday with the familiar varieties of Amazing Grace, a psalm written by a former slave trader who became idle, the theme being that forgiveness and redemption are possible anyway.

“And so we’re grateful you all made it, even though it’s a weekday,” Lanes said.

Church members held their Good Friday here for the first time. A crown of thorns was on display and reminded everyone of what this day is for Christians.

In downtown San Diego, there is nothing unusual about seeing people walking, but a closer look at one group revealed that they are pedestrians with a clear purpose. They participated in the 29th annual walk of Good Friday with Suffering, a Restoration of the Cross Stations. The walk includes the 15 chapters that the Christian scriptures say Jesus experienced on his journey to the skull.

“This is Station 14, Jesus is lying in a tomb,” said a man who led the group.

The infamous journey of more than 2,000 years ago has been brought to the present; The station at each station is an opportunity to reflect on the problems facing humanity in the early 21st century.

“So here we are thinking about the suffering from the environmental destruction,” the group leader said.

And continued, marching to their destination, the San Diego rescue mission. There, Rosemary Johnston, who started the march and still coordinates it to this day, spoke with KPBS.

“I hope it helps people remember that there is more to Easter than the Easter Bunny,” she said with a laugh.

This year, the war in Ukraine shaped Johnston’s view of Good Friday.

“Everyone, their heart bleeds on what is happening and we feel helpless and at times like this we need to turn to God in prayer and ask for guidance and forgiveness from the oppressors and also to those who have been hurt.” she said.

“I always wanted to do it and it’s the perfect moment,” said Xavier Swaya, a freshman from Christo Ray who played Jesus in the event. Savaya’s understanding of the events of Good Friday was simple.

“It was a day of pain and sorrow but in the end it was light. He was resurrected. He saved our souls,” he said.

The march is, of course, a Christian event. But Johnston said she hopes the basic message of forgiveness and ultimate love has reached everyone, whether they are believers or not.