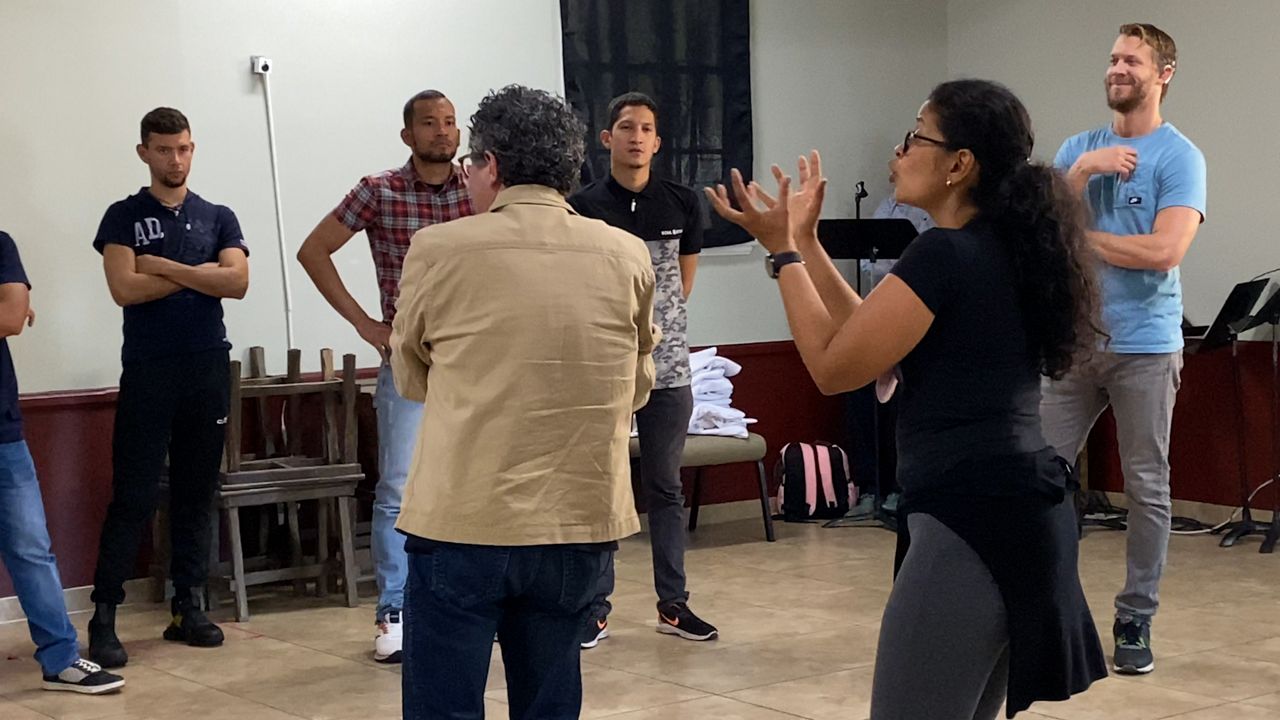 LOS ANGELES – Traditionally, when Florsten’s character appears on stage in the second act of “Fidelio”, he is alone in his prison cell.

But this is no ordinary performance of Beethoven’s only opera. Actor Josh Castile shares the role – and stage – with Ian Koziera. While Cosiara sang the first words – “Good! Walsh Darkel is here!” In German, or, “God! What darkness here!” In his rich tenor voice, Castile, hands tied with prison ropes, removes them equally passionately in American Sign Language, his face tells a story of anguish, longing and loss.

“It’s not a sandwich,” he explained, communicating in American Sign Language and being interpreted by Maria Cardoza. “It’s not a sandwich, but it’s really just a combination of a lot of things. It’s almost like a cake and a recipe we make to really create the character.”

Castile was not born deaf but, after developing a kidney infection as a baby, began to lose his hearing during his lifetime. He suspects he will be completely deaf until the age of 30.

Although he has appeared in several musical theater productions, including the revival of Deaf West’s Tony Winner’s Tony Awakening, “Fidelio” is Castilla’s first opera, and it connects to the materials in a very internal way. Until the work first appeared in 1805, Beethoven was also deaf.

Castile immediately notices that the show includes many moments where people are desperately trying to communicate or understand each other. As a deaf artist, this is something he recognized.

“We really put an emphasis on connection, like eye contact, making sure I understand you, you understand me, that we have a kind of mutual understanding of each other. And I find that in this script,” he said. “There’s a lot of communication that does not necessarily happen effectively. So it’s very interesting, like [Beethoven is] A hearing man became deaf later. He probably had an experience of feeling very disconnected from a lot of people in his life. “

The concert is a collaboration between LA Phil and Deaf West Theater, and is truly a testament to the power of the media.

“There are five languages, always, in our rehearsals,” noted director Alberto Arbelo.

There are deaf Western theater actors, who appear in American Sign Language, as well as a choir of deaf actors – Coro de Manos Blancas – who use Venezuela’s sign language but have performed in a more interpretive way. English and Spanish are heard throughout the rehearsal room – Arvelo and LA conductor Phil Gustavo Dudamel are both from Venezuela – while the lead singers and Los Angeles master ensemble perform the piece in the original German.

There is a lot of interpretation and translation that happens, but oddly enough, says Arvelo, what is not lost is the connection.

“Music is just energy. And energy can come from different places. And changed by it,” he said. “I mean, the singers have changed by the actors, the actors by the singers, and we get something we didn’t expect, it’s like a hidden energy, that’s there. Just … just art.”

DJ Kurs, artistic director of the Deaf West Theater, says the opera world has not always been accessible to the deaf community. In fact, this is the first time they’re collaborating with LA Phil.

“So I’m excited to integrate the opera world into the deaf community,” he said. “So you know, Beethoven himself became deaf. And he wrote ‘Fidelio’ when he had already lost a lot of his hearing. So it really was an honor … to make ‘Fidelio’ accessible and visual in sign language.”

“Just seeing the opera world learn so much more about their art and how they can actually collaborate with us as deaf artists and really do music and art together,” he explained.

“What I think is super wonderful about it is that even when we get into the really technical parts of the singing of all our roles, you get to see a kind of contra to each of our performances, which is the deaf or hard of hearing actor capable of giving a physical impression of what we create vocally,” Koziara said . “It was unbelievable. Just the ingenuity of it is unbelievable. One of my favorite productions I’ve ever done.”

ASL choreographer Colin Analco, who helped translate the German text into ASL, says this production opens up new opportunities for art and can change the way even the most avid opera fan experiences music.

“It’s a world I’ve not been able to access for a very long time. I feel like I’ve been given some window into what it looks like. And it’s just endless opportunities and possibilities,” Anelco said. “The visual aspects of what can be created with music are only beneficial to both worlds. We create something new with this production, something beautiful.”

This is the first concert of its kind but hopefully also the first of many. With the recent Oscar win for “CODA” and West Deaf now working on a musical version of the story, deaf artists feel doors are opening for them like never before.

“It’s really a huge moment in our community,” Kors said. “And we prepared and we have a lot of work in progress, and we’ve created more opportunities for deaf players.”

“Yes, I definitely think the world is changing,” Castile agreed. “I think the conversations change all the time. And I’m very excited about that.”

But Castile emphasizes that while these conversations are taking place, they should not be just about the deaf. Deaf artists need to be involved in them in a complex way. This is only the beginning of what could be a transformative journey, but only if the deaf community wins a leading role.