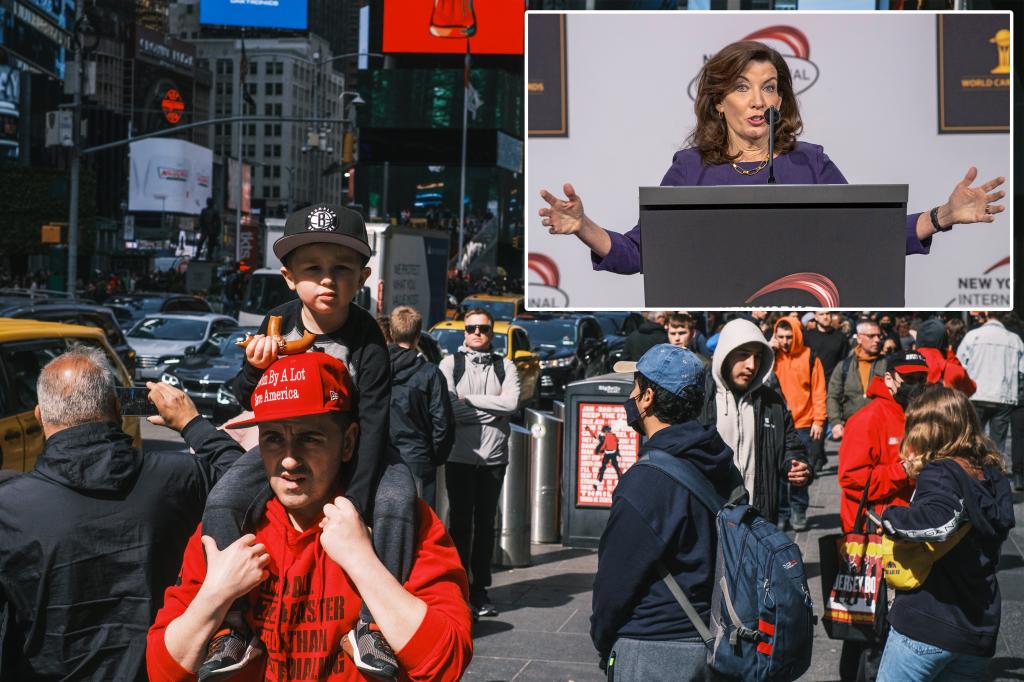 Gov. Kathy Hochul said in a new interview that New York would never be more crippled than the COVID-19 epidemic, and promised, “I do not intend to close it again, you can count on it.”

The Democratic nominee for governor has vowed not to re-impose COVID-related restrictions that have led to a state halt – as the Big Apple faces an increase in the number of cases.

“I’m going to protect the health of New Yorkers, but I’m also protecting the economy,” she told John Catsimtidis, host of The Cats’ Round Table, in an interview released Sunday.

“I’m not going to close it again. You can count on it.”

Hochul’s comments came after New York City Health Commissioner Dr. Ashwin and Sun revealed on Friday that the five boroughs would soon move to the level of “moderate risk” due to an increase in the number of cases driven by the highly contagious Omicron subdivision.

“In the coming days, probably early next week, we’re going to enter a new level of risk, moving from a low-risk environment to a medium-risk environment on a case-by-case basis,” he explained in NY1.

The five districts are now considered a “low” risk of community spread, but health officials say Omicron’s new sub-variation, BA.2, as of Wednesday was responsible for about 80 percent of the country’s infections.

As of Friday, the COVID-19 positive rate in New York City, which averaged seven days, was 4.46% – up from 1.46% at the same point in March. Across the country, the average seven-day positive rate was slightly higher at 4.68% – a significant increase from the 1.85% reported on March 19th.

Meanwhile, Hochul said she is working closely with Mayor Eric Adams to ensure Big Apple tourism is not affected by the city’s rising crime rate.

“We are seeing an increase in the number of cases and people starting to get anxious, and that may affect whether people arrive at this time, but they will not stay away because of the crime issue,” she stated in an interview with WABC, less than a week later. A Brooklyn gunman opened fire on a crowded train during rush hour in Brooklyn.

“We’re going to lean heavily on it. I’m working with the mayor. We now have ties to the mayor’s office that have not existed for a decade,” she added, referring to the hostile relationship between the humiliated former Gov. Andrew Cuomo and former mayor Bill de Bellasio.

“So we roll up our sleeves. We work with our law enforcement agencies to get the job done, while respecting the rights of individuals, which is important to us as well.”

In March, major crimes rose 37 percent, NYPD statistics released earlier this month showed. In the subway system, serious offenses reported have risen by 68% so far this year, according to NYPD data. Underground robberies have jumped by 72%, crime attacks have risen by 28%, and major thefts have increased by 110%, according to the department.

In a Sunday interview, Hochwell went on to present the key achievements of the late state budget – saying she was “really proud” of the steps signed into law, including changes to advanced pre-trial policies.

“We talked about preserving the central value of the bail reform because at one time, two people were charged with the same low-level crime, one went home and one went to jail pending trial. We knew it was unfair,” she explained. “But some of the more serious offenses, such as gun possession offenses, were left unfit for bail.… We stopped it. We [now] Charges of arms must be returned under the guise of bail laws. They may be entitled to detention or bail. We fixed it. “

“I know a lot of people who run for office say we did nothing. Well, they need to look at the law and know what we have achieved,” she added. “I’m really proud of that.”

When asked why New Yorkers should vote for her in the upcoming primary and general election, Hochul pointed to the work ethic and her ability to connect with New Yorkers across the state.

“Because I’m the hardest person they’re ever going to meet. And I’m fighting like hell for them every day,” she told Catsimatidis.

“I’m rough and dumb, I know how to do the job, and I’m there in the communities. I know this country – after I was deputy governor – I know it better than anyone. I know the problems of the people, I know the streets of New York. “I’m going to keep doing what I’ve done all my life, which is to fight for people.”