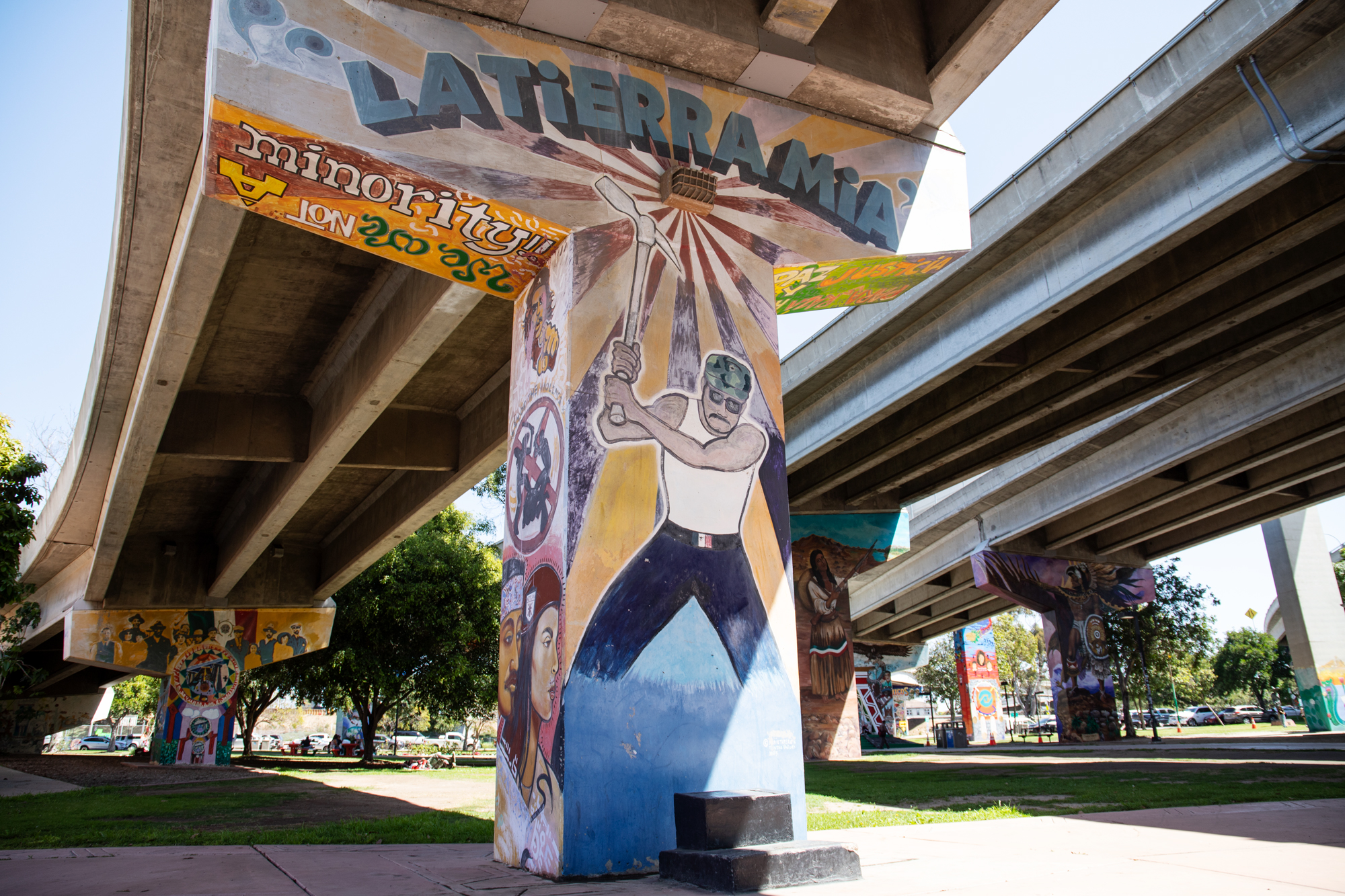 Last Tuesday, special elections were held for the previous session of Lorena Gonzalez in the 80th Assembly District. It encompasses a large part of the southern bay and is home to a variety of working class communities.

The two leading contenders in the race, both Democrats and Latinos who previously served on the city council, cited their experience and upbringing in Bario Logan as central to their identity and worldview. They swore to protect her interests.

However, as I walked the streets and parks of Barrio Logan on election morning, I struggled to find anyone who voted, let alone know who the candidates were.

Of the nearly two dozen people I interviewed, most said they did not have the time or did not care. Others are tired of hearing politicians make promises rather than keep them. Elected officials come and go, they said, but their lives do not improve much.

Fernando Maggie, a 34-year-old welder, told me that San Diego’s extreme cost of living was on his mind these days. He’s the lucky one who found a job in shipyards with good perks, but he’s still worried about how many people around him jump from job to job to stay afloat.

Although there was a yard sign for one of the candidates in sight, Majia said he was unaware of the election – and not surprised that there was still time to consider.

“I do not think it will change anything for the better,” he shrugged.

The turnout, as of Thursday afternoon, was 16 percent. But it’s among registered voters. Taking into account the entire adult population of the county, the total number of shows drops to 13 percent. As low as it sounds, it’s about equal to what Gonzalez got when she first won a seat in the California Assembly, thanks to more special elections, almost a decade ago.

Maggie is no exception, and the indifference I found in Bario Logan is not unique to the community. The special election for the neighboring 79th Assembly district last year was with about 20% turnout among eligible voters.

The Center for Democracy contains at the University of Southern California combined voter registration data for county-level citizens and merged it with adjacent census kits. The numbers are inaccurate but they still offer a window into where concentrations of non-voters live.

I took the researchers’ work one step further and analyzed the 50 census kits at both ends of the spectrum in the province of San Diego. Communities with the highest estimates of non-voters also have higher poverty rates, higher percentages of tenants and a higher number of immigrants from the regional median. Overall they are younger and less educated.

Some of the census corridors with higher estimates of non-voters are located near college campuses, which is not surprising. At the same time, communities with more voter turnout – including La Jolla, Carlsbad and Rancho Bernardo – tend to be more white. But there are more than a few exceptions. For example, a number of historic black neighborhoods in southeast San Diego have relatively high registration levels (documented at the national level). Same goes for parts of South Bay.

Jose Lopez, the local director of the California Residents’ Alliance for Community Empowerment, identifies with people who do not believe in the political process because he used to feel that way. Instead of lecturing to anyone while he is out organizing, he tries to connect by sharing his experience. He points to various improvements in the park around Chula Vista – investments in lights, trash cans and a stop sign – after his team showed up at City Hall.

“It started to change slowly because people in the community demanded it,” he said.

Similarly, Lexus Carter, director of the Civic Involvement Program at Mid-City CAN, told me that people are just overwhelmed and do not know how to call a public meeting to support themselves and their neighbors.

“It’s not an excuse, but it’s a reason, because people are trying to figure out how to pay rent next month,” she said.

Instead, its organization tries to meet people where they are – by pairing voters’ information with information about food and housing that already exists.

For his part, Franco Garcia, a policy leader in the Coalition for the Environment’s Health, is drawing the attention of those who do not vote to drop-down races and measures that could have a more immediate impact on their lives. In 2018, for example, a means of controlling rent in the city of National failed by less than 200 votes.

The turnout has improved in neighborhoods that suffer disproportionately from pollution and poor air quality, Garcia said, but there remains a problem that most candidates and supporters of the ballot box focus their efforts on potential voters.

“People like me, who vote, get all the attention. Ignore those who do not,” he said. “It widens the gap.”

There are of course real barriers to the ballot box. People who otherwise want to vote may not speak a dominant language. They may be imprisoned. They may have difficulty reaching the polls. They may be confused by the dates and brochures they receive in the mail.

But many are just not happy. Those who choose to sit in elections tend to lean left on health services but are more conservative on social issues. They have brought rationality after years of seeing income gains go almost entirely to the top, for which the public sector does not exist.

True, primaries and special elections have always attracted less attention. But even high-profile competitions at the national level can produce incredible statistics. An estimated 80 million Americans abstained from the 2020 presidential election. The 2016 presidential election saw an increase in turnout compared to 2012, but in nearly 56 percent of the voting age population across the country, it was still low by international standards. (San Diego’s turnout was much higher.)

By no means is this a new phenomenon. Researchers have been warning since the 1980s that the rising rate of abstinence is consistent with a decline in union membership and ensuring representation of the middle and upper classes in public affairs. The campaign announcements, in turn, are tailored to suit those interest groups.

By 2006, the Pew Research Center reported that only a third of the adult population in the United States was a “normal” voter. The remaining two-thirds were considered “alternate” or “rare” voters, or simply unregistered.

Contrary to stereotype, those who do not vote are not always disconnected. Quite the opposite. Some are avid media consumers and consider avoiding an act of protest.

Peter Graves, a 39-year-old musician and audio engineer, was a credible Democrat for years, but his belief in the mantra of “the color blue no matter who” began to falter. He was in San Diego long enough to remember Donna Fry’s outrageous campaign for mayor in 2004, when thousands of ballots that would have pushed her over the edge were thrown out because voters wrote her name but did not fill the bubble. Two presidents in his lifetime also won the popular vote but lost the White House because of the Electoral College.

The official response to the epidemic also had a sour effect. Graves was particularly turned off when he saw people appearing at school and county board meetings to scream about masks and vaccines. All the while he was having a hard time getting his unemployment benefits through the state.

Years of emotional investment followed by disappointment left him wondering if the differences between the two major parties are so great. His feelings intensified when he recently learned that both Democrats and Republicans in Congress influencing U.S. military policy are invested in prominent defense contractors, and may benefit from their oversight duties.

Graves is now on the verge of bowing to national-level elections and saving his mental space for the local candidate and the ballot box offering something more than empty value statements. Reducing the cost of housing remains his main concern.

“More than ever, I think about not voting,” he told me.

Others believe there are more significant ways to make a difference than to vote every two years and hope they are not misled.

Jordan Searles, a 31-year-old grocery store employee, told me he was tired of dealing with less than two evils, he was tired of choosing a team for damage control purposes only, he was tired of the sporting spectacle of the election season that is. Detached from the reality on the ground, where people are literally dying in the streets. After the Black Lives Matter demonstrations in 2020, he shifted his energies to working with mutual aid, and collecting free food for the needy San Diego residents.

As he sees it: “These actions, politically, are more important than voting.”

For someone like Searles, living in a democratic society means practicing what you preach. The truth is that many of the problems we face in the 21st century – such as income inequality, homelessness, climate change – require a collective response beyond the capabilities of any person accustomed to seeing himself as a mere consumer in the market. Disconnection only feeds the status quo.

When I mentioned this to Ramla Sahid, the CEO of the Partnership for the Advancement of New Americans, or PANA, she agreed. It is vital that people on the ground feel that others have their backs, she said, and mutual help can help achieve that. Political.In her opinion, it must be accompanied by mass mobilization so that ordinary people can regain a sense of agency and voice and support their material interest or their social values.

“That hope can only come from being in a team,” she said. “You can not create it yourself in your living room.”