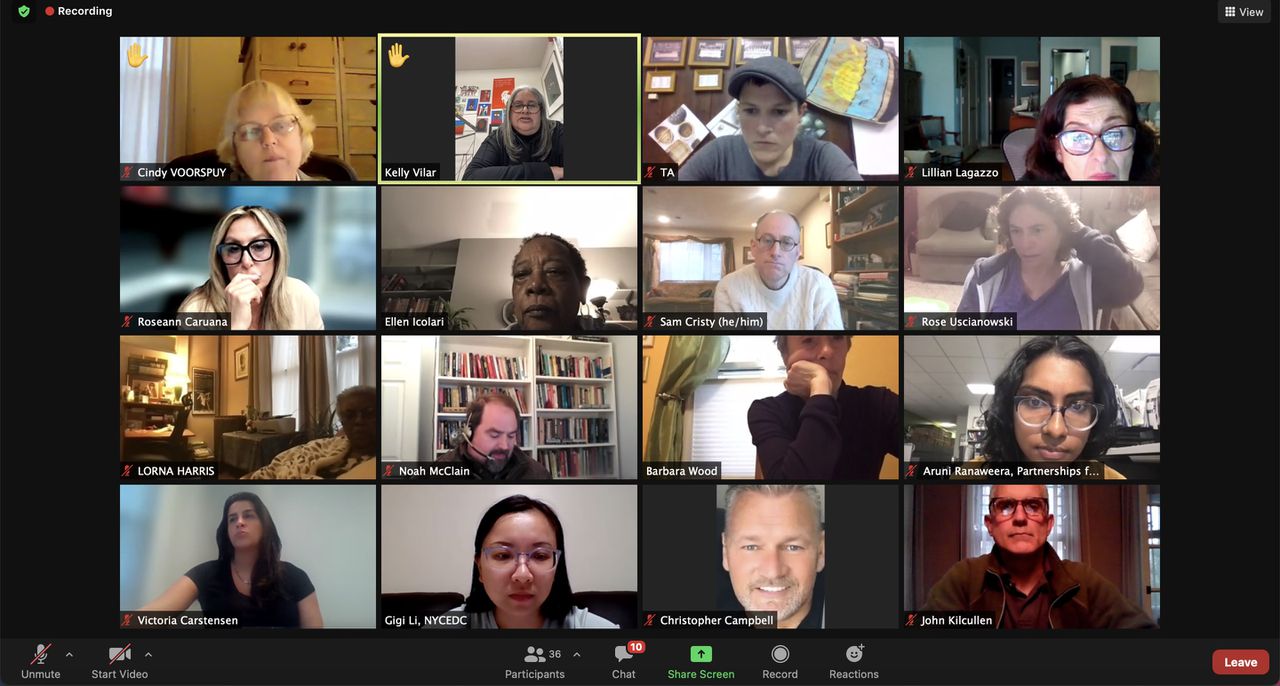 STATEN ISLAND, New York – Along Bank Street in New Brighton there is a cemetery of failed and unfinished projects that have prevented the local community from accessing the waterline for more than half a decade.

The location where the New York Wheel was to be built is still considered a construction site by the New York City Economic Development Corporation (NYCEDC) – which oversees the project – even though it has not been active in recent years, and the community wants the waterfront behind.

Nearly 40 community members, leaders and representatives from organizations and municipal agencies, joined on Wednesday evening to zoom in to discuss the lack of public access to Bank Street and the beach, as well as its deterioration.

“For years we struggled to develop, to improve the water line – especially this area along Bank Street. At one point they really designed it – planted weeds, had beautiful walks; there were training stations; people fished there,” said one New Brighton resident during the round table On Bank Street.

“It was a really nice place to visit. It was about like a local park, and then suddenly the wheel came. Well, first, Hurricane Sandy caused a little bit of destruction. But then the wheel came and everything stopped down there. And it became a wasteland,” she added.

Residents also discussed other issues in the area that limit them from enjoying the waterline area, such as the retaining wall that slopes between Richmond Terrace and Bank Street, and the boardwalk along Richmond Terrace is sloppy and uneven, making it a safety hazard for the elderly. People with disabilities walk on them.

As some city agency representatives explained during the meeting, some of these issues do not have simple solutions. For example, parts of the retaining wall are owned by various agencies, including the city parks department and the transportation department (DOT).

Kelly Villar, founder of Staten Island City Center, described Bank Street as “just a symptom” of some of the problems along the waterline, but “also low hanging fruit” because one agency, NYCEDC, is responsible for the lack of access nearly three-quarters of a mile from Bank Street, according to alternatives transportation.

“I think you’re probably the people in the conversation who have the ability to change all of this dynamic, honestly,” Villar said.

Monroe Johnson, vice president of neighborhood strategies for NYCEDC, explained that NYCEDC has not given up on the wheel project, which is why it still considers the area a construction site.

“My understanding is that we have not yet completely given it up so for this reason, the main part of this site will remain closed as long as the deal is still in progress,” Johnson said.

New Brighton resident and founder of the Richmond Terrace Therapy Gardens, Sarah Blass, commented that this explanation is “shameful”. She also noted that some people have created improvised, but dangerous, ways to access the waterline.

“Not only do I see a lot of people fishing, but I’ve seen community members actually pulling weeds, making trails, using wooden planks to build the kind of seats and ways they can access the beach,” she said.

Another resident told NYCEDC members in a conversation that leaving part of a bank street closed even though construction is not being done sends a message of disregard to the community.

“It’s been called a construction site for years, but almost nothing has been done on it in the last three. I can not understand why they can not open it, since the wheel is not built,” she said. “I just feel like people are completely ignored; that the only thing that matters is these big projects that come to nothing.”

NYCEDC offers an alternative, which may take 1.5 years to happen

While NYCEDC representatives in the conversation expressed some sympathy for the residents’ lack of access to the beach and offered to share the concerns with higher officials, they did not offer a promise to reopen Bank Street to the public.

Instead, Johnson described several FEMA-funded projects planned and stopped during the epidemic, which included a footpath and green space along the waterline. However, these projects may take up to a year and a half.

“I feel I can say with good conscience that this relatively small project that is limited to the waterfront and is specifically beyond pedestrians will be a little more manageable,” he said.

Villar referred to Bank Street as “an opportunity to bring the water line back to the people.”

“Our history has written to us that there needs to be a community voice in planning, especially in this community on this water line, for the transparent water to work; for it to succeed,” she said.

“I would really like to see us start a conversation that changes all the dynamics of this waterline and gives it a plan. … We need you to work with the community work, with our council members office and start talking about how we are changing the dynamics of this ridiculous beach. Every single project on the waterline, whether supported by NYCEDC or not, has failed, “added Staten Island CEO.

“It could not be that this beach would be like this any longer. We have been waiting too long. … and we are just continuing to accept these promises from powers over which we have no control,” Villar added.