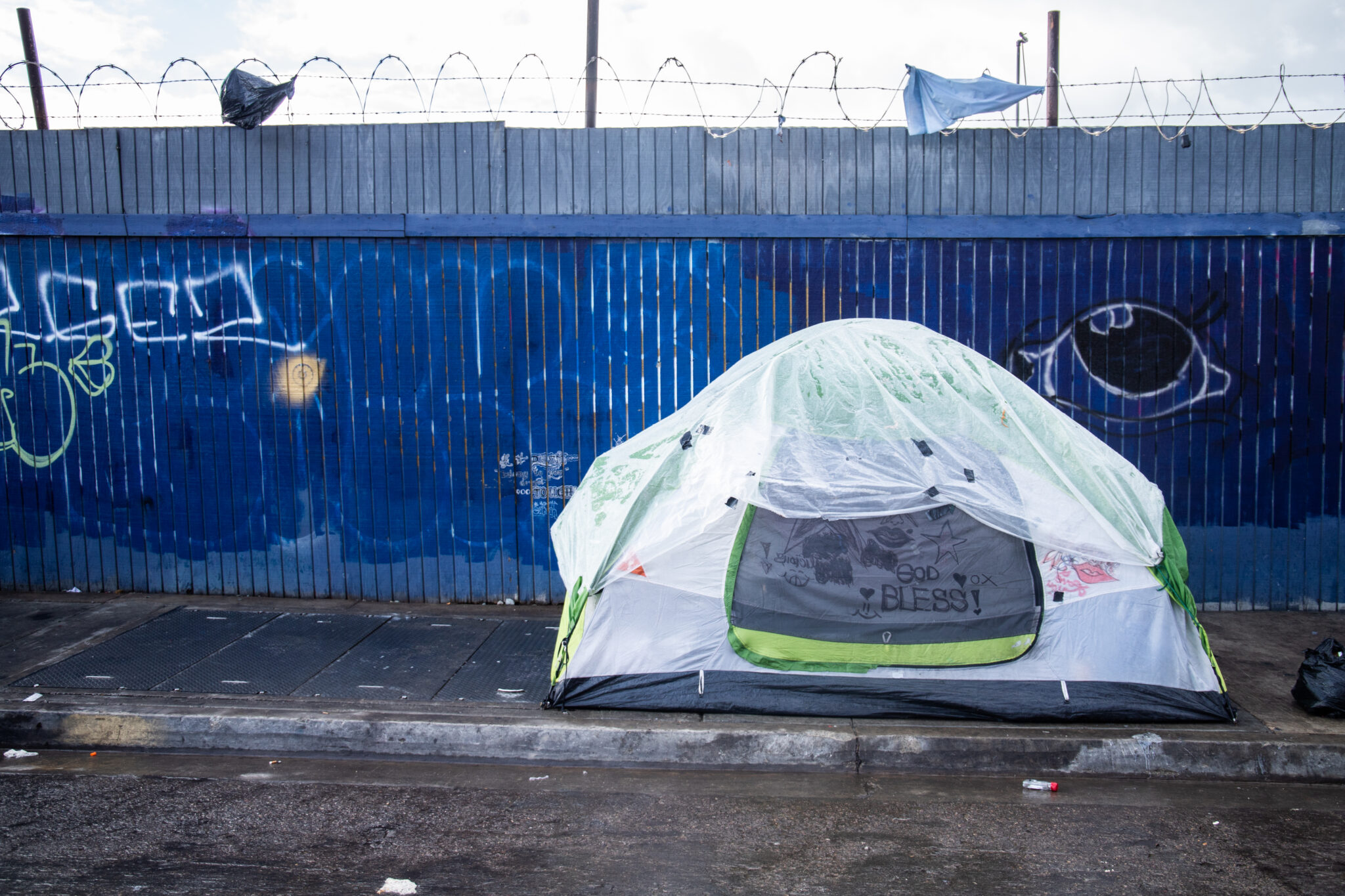 Something happened 10-15 years ago to the homeless. I do not know exactly what caused it. But I remember walking in the Ocupy San Diego protests – from the tent tents that popped up in City Hall in 2011 and demanding responsibility on Wall Street for the recession – and realized that many of the campers were not necessarily active but homeless people who came to live on stage. Became a supportive village.

Tents and homeless people are not a combination of the 21st century. Tents and campers once filled the entire Mission Valley in the early 1940s, when immigrants from across the state shouted for San Diego to get the many jobs created by the defense industry.

But the tent tents that popped up in the East Village, along the Broadway Navy compound and across the hundreds of San Diego River channels, began to frame the conversation here differently. It was as if the unprotected population was tired of two things: tired of hiding and tired of being cold.

The tents privatized public road rights and raised the homelessness to the public consciousness.

They were a protest – an expression of our failure.

The tents helped people create a community and provide mutual help. They created a sense of security, privacy and even family life but also offered coverage for crime and violence.

Worse, are the concentrations of death and disease. An outbreak of fecal A-borne hepatitis A led to suffering on such a scale in 2017, prompting city and area leaders to take homeless people seriously in a way they did not, even though tent villages have expanded for several years. Now, even those most in love with the tent tents and the condition of their residents can not deny the horrific deaths they often host, whether it is at the hands of murderers and traffickers or stray drivers who lose control of their vehicles. More than ten years later, we are only now, barely, grappling with what the tents have changed about homelessness.

San Diego Mayor Todd Gloria has said something about them recently that should provoke thousands of conversations and rethinking what we are doing about this crisis.

In an explanatory article in the San Diego Union-Tribune on March 28 about the crisis plan for the homeless he is pursuing, Gloria acknowledged the reality created by the tents:

“One of the major challenges we face is that many of the people who park on our sidewalks or in malls do not want to live in a communal environment – which most of our shelters are – so they refuse offers of beds in these facilities,” he wrote.

The city currently has 1,468 contract beds in centralized or shared frameworks.

People who worked on outreach and services for the homeless knew that many people preferred their personal tents over shelters for many years. There is no particular insight into the mayor’s claim other than that he said it. And if he believes in it, and he should, then it has enormous implications far beyond the city of San Diego. If others agree, we need to rethink how we deploy millions of dollars to address the problem and how we talk to people on the street.

It’s like a taboo has finally been broken. People who live in tent tents do not want to move to shelters. The data is amazing. Whenever the city sweeps a huge encampment, the vast majority of outreach workers offer shelter to refuse. Why? Not because they necessarily want to remain homeless. But because their personal tents offer them respect, privacy and enough shelter to survive.

In contrast, community shelters can be dystopian, dangerous and restrictive. Their inadequacy for a healthy life became apparent, again, when the disease struck. The first thing former mayor Kevin Poconer realized when he started spreading at COVID-19 in the United States is that he needs to evacuate the shelters. A bunch of people stuck in a non-ventilated environment were ideal for the spread of the disease.

The corona virus has left homeless residents even less interested in these options as alternatives to their camps.

“If the environment they enter is not safe, clean or comfortable, what makes it different than being on the street?” Said Hanan Scarper, the regional director of Homeless Aid, the city’s main partner in many relief and assistance efforts for the homeless. “When we do traditional shelters and response efforts, we do not always think of respect.”

It turns out that unsettled residents are very similar to people who have homes. They want privacy. However, they want to be close to the community. They love pets. They love being with loved ones. And yes, some people like to do drugs or drink. However, all of these things can be limited or difficult in a diverse environment.

So what do we do anyway? Just last month, County Superintendent Nathan Fletcher announced that the county was going to help build a new mega-tent shelter for 150 people in the Midway area. The mayor supports. But if the mayor agrees that community settings cannot compete with the tent tents, why do we still support them? I asked his staff.

“Our goal in shelters is not to create the ideal situation but to put them in a position of access to services to become part of the system that eventually leads them to residences and get them out of the street. It’s not safe on the street,” said Rachel Laing, the mayor’s spokeswoman.

But, the mayor himself said it does not work?

“Well, that’s where the enforcement comes in. If we have enough beds, we are allowed to force people to move,” she said.

Now we’re moving on somewhere. We say the quieter parts out loud now. Community shelters, while helping some, provide tools for the city. In a world where personal tents have changed everything and the widespread adoption of recreational camping equipment by the homeless has made life simple enough and comfortable, with enough respect, the large shelters allow the city to make homeless residents once again uncomfortable.

This is what the mayor decided to do. The tents make sense to some, he wrote.

“But we just can not be a city that allows people to set up camp where they want. It is not safe, it is not sanitary and it speaks ill of us all if nothing is done to deal with poverty and despair,” he wrote.

He is also right in this matter but the very displacement of tents sets in motion an endless cycle of displacement and re-rooting. The people do not disappear, they just regroup. The process is difficult for the people on the streets, difficult for the police to carry it out and if the ongoing presence of so much human suffering in our streets is itself a form of violence that harms the trauma of everyone who has to go through it, then the approach ensures most possible people will experience it.

Perhaps it is worthwhile, instead, to rethink this paradox. Sometimes when you are fighting something, you have to channel its energy instead of continuing to try to destroy it. The personal tents are not good. But they represent a human desire to take care of themselves and build a community. The tents reveal not a desire to be on the street but a very human desire to build a house.

There is no reason why our unprotected population should not continue to do so on its own if given the place.

“From our experience, what we have seen is when customers come to a clean and well-kept environment with good food and a healthy culture, they try to take care of it. They see people take care of them and it gives them hope,” Scarper said.

They want to build houses and yet we spend so much of our resources and energy trying to destroy them and force them into our system.

It would have been one thing if it had worked but it did not. Despite the mobilization of city, county and state resources, the situation is getting worse. More people are suffering. More dead. More life in filth.

It is no coincidence that our cost of living is already skyrocketing just as the problem is deepening. Homelessness is the lowest step in the housing ladder. Instead of cheap housing, they set up personal tents.

The mayor does not want to host them in a safe camping village, Laing says, because the city and vendors cannot afford the support people needed to keep it safe. But he also proved that he is incapable of winning the war over the tents on the streets.

If you’re losing a war and spending money on a war, it might be time to rethink it.

The people on the streets tell us that they want a place to start their own lives.

No matter what dollars we spend to force them to consider our approach instead, it may be better to spend them keeping them safe and clean as they pursue their approach.