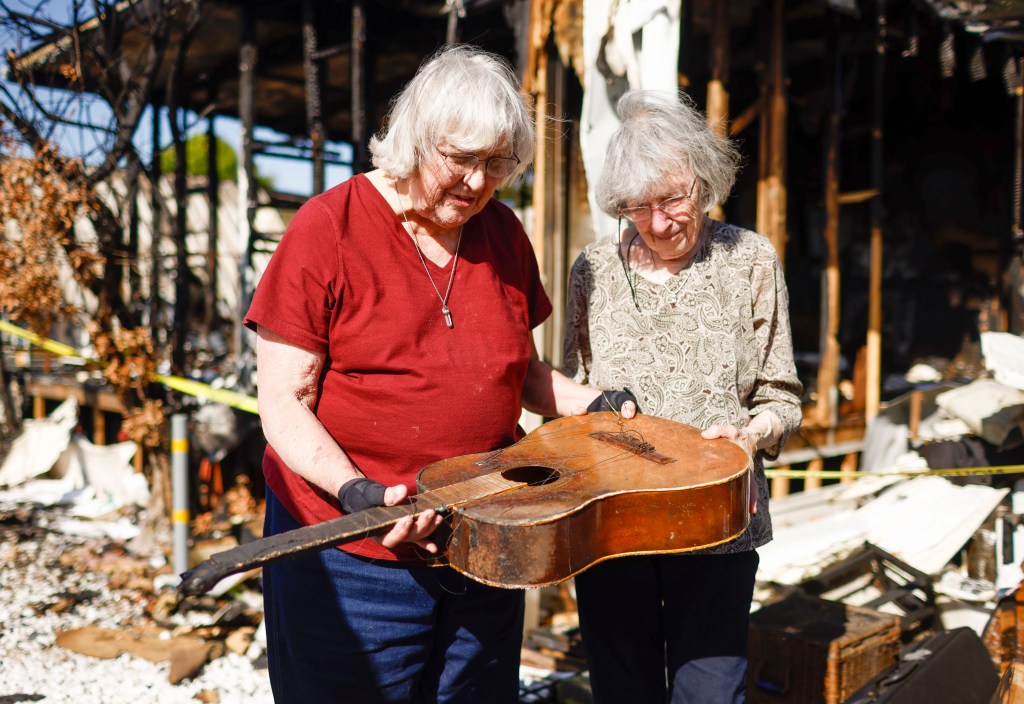 San Jose – After a fire reduced the home of Elaine Miller and Jane Silver to Willow Glenn last month, all that was left were scorched notes, family photos and a scorched piano on their front lawn.

Among the losses were nine filing cabinets filled with music, including 25 to 30 original songs, essential to their desire to perform dozens of times each year in nursing homes across the region.

“If you can imagine how much paper it is, I know that’s why we burned so much,” Miller said. “I just had so much music there. Things we were willing to put out and do.”

The duo known as “The Music Gals” are determined to rebuild their 1,200-square-foot home and continue to bring music to the lives of hundreds of other senior citizens as they shuffle through insurance issues, fire investigation and the feelings of those facing their losses.

The couple met almost 30 years ago in the Los Angeles area and moved to the River Glen Community, a mobile home park, about 13 years ago. The couple initially connected because of their shared love of music – Silver plays guitar and ukulele and Miller plays piano, guitar, viola and saxophone, among others. After moving to the Bay Area for teaching jobs and retiring, Miller and Silver began performing in Shir-a-Long in nursing homes across the area. Over the years, their tight band of musicians has swelled to nine members.

Then, a fire broke out on March 13 at about 10:30 a.m., just after the couple packed their car with their tools and headed back to the band’s club at their mobile home park club. One of their neighbors ran over and screamed that their house was engulfed in flames.

“I ran and saw there were flames here, flames there, just everywhere,” Silver said.

“I did not believe it,” Miller added. “I thought he was laughing. I could not believe our house was on fire.”

More than two dozen fire brigades responded to the blaze and the fire took control of the blaze by 11:18 a.m., according to Fire Department spokeswoman Erica Ray.

The fire brigade of the fire brigade investigated the incident and a variety of arsons, stating the reason as “unknown”. As of April 10, firefighters responded this year to 1,187 fires in the city, compared to 1,228 fires last year at the same point.

Questions about the fire are delayed by Miller and Silver, who said a gas leak broke out a few weeks before the fire. Miller said their insurance company ruled out the gas leak as a cause of the fire, but she still wanted PG&E to come and inspect the house.

“I’m angry that no one saw this house except the insurance company,” Miller said. “I wanted to see a test done by PG&E or the fire company or something.”

PG&E confirmed that it initially responded to the fire “to turn off gas and / or power lines to make the situation safe for first responders,” but referred further questions to firefighters. A PG&E representative said the company received a call on Feb. 1 about a possible odor of gas and confirmed a leak on the home line. Because the leak was under the authority of the landlord, an independent contractor was called in to make repairs and put a lid on the gas and stove. PG&E said it conducted a safety check on February 2 to make sure the repairs were carried out properly.

The fire department said residents were “looking for a level of investigation that is not customary with us,” according to Ray, who added that the arson team inspected the site “very thoroughly” during the investigation.

The Music Gals are planning to rebuild their home on the same site – and have launched a GoFundMe page, which raised more than $ 17,000 as of Monday, to help raise funds.

It will take about six months and cost about $ 200,000 to rebuild their home, of which the insurance company will cover about two-thirds, according to the women. The pair also lost $ 30,000 worth of items, including three guitars, two pianos, a dogeridoo, rain sticks and a marx.

“Photo albums and personal stuff like that were priceless,” Silver said. “They just disappeared.”

When they were the busiest, they played four shows a week, but the plague stopped them almost completely, leaving them with one show once a month at Cupertino. “Take Me Home, Country Roads” by John Denver and adults from the 1920s and 1930s, including “It Had to Be You,” are among their most popular songs among senior center residents.

“I always feel better after rehearsal, even if we haven’t played in those places,” Miller said. “It’s a respiratory treatment. Singing is wonderful for you.”

The couple said they feel a sense of community with their neighbors at River Glenn Mobile Park, where they have lived since moving to the Bay Area, and want to show them they can rebuild. They even enlisted some of their neighbors to join Music Gals and perform with them in nursing homes.

Cheryl from Gil, who lived down the street and saw Miller and Silver’s house go up in flames, said she took an electrician to renovate her home after the fire.

“I definitely took some steps I may not have taken. I underwent a complete electrical renovation and made sure everything was fine,” said Gil. “I had already put the electrician in line but as a result I became much more picky. I accompanied him here and said ‘do not let my house look like this later’.”

“We are all fans to see these two wonderful women without resources,” she added.

Miller and Silver are hosted by some friends, who have empty rooms in their home after all their children have left, and received money from the Red Cross for money to buy medical devices, among other things.

Miller said she is currently working on a song about being left homeless.

“We’ll have to come up with a positive opinion otherwise I would not want to sing it,” she said.