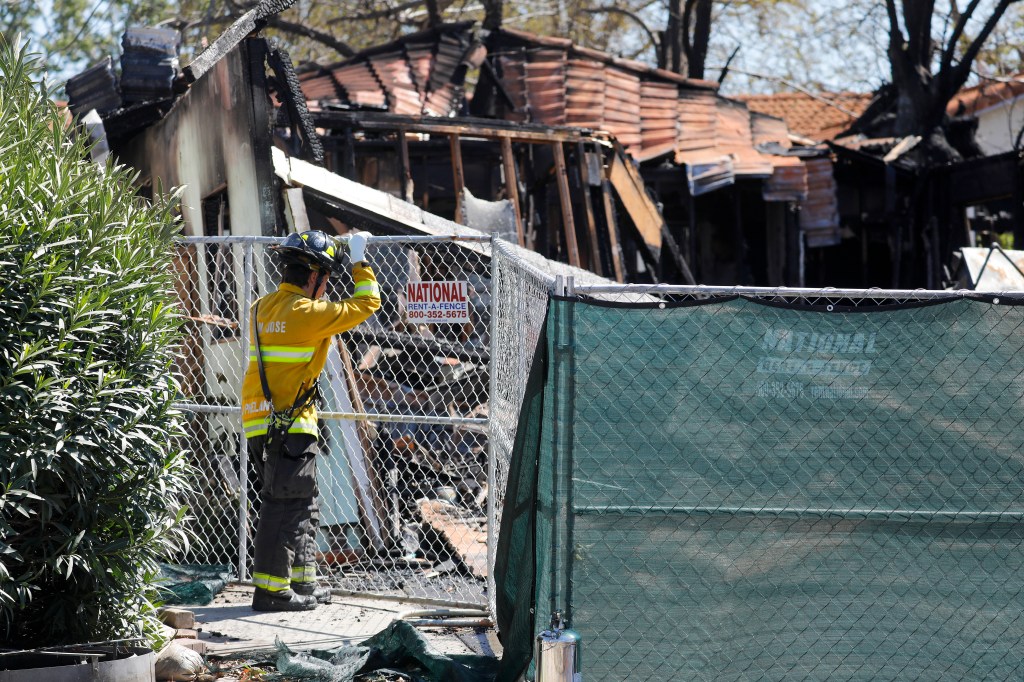 Nearly a month after a fire of three alarms consumed a house in East San Jose and killed one person inside, the Santa Clara County Department of Death Investigators identified the victim as 64-year-old Lawrence Jimenez.

Jimenez died after a house fire broke out shortly after 10 a.m. on March 20 at 1028 Wilsham Drive in East San Jose, according to the coroner’s office. Another person who was living in the house at the time was taken to hospital with a life-threatening injury.

The house, which has been the subject of more than half a dozen code-enforcement cases since 2004, had a fence erected around its perimeter at the time of the fire.

The city’s code enforcement in June 2021 ruled the property “unsafe for occupancy” due to improper housing conditions that included structural hazards and shortages of electricity and lighting. During an inspection in January – less than two months before the fire – law enforcement officers found people inside the home and ordered them to evacuate, reminding tenants that the city sees the home as unsafe to live in.

But neighbors said it failed to prevent people from getting in and out of the house.

“The city needs to take responsibility because they did not do more,” Tuan Lee said, as his nearby home was damaged by the fire. Lee said he did not blame those living in the house, adding that he “loved them.”

This news organization made several attempts to contact the homeowners and members of the Jimenez family but was unsuccessful.

In April 2016, firefighters responded to the fire of two alarms in the same home. Residents told firefighters at the time that someone had cooked and accidentally lit a fire, which spread to the attic, according to a 2016 fire report.

Firefighters indicated that there was a smoke detector inside the house that was disconnected. When asked about this finding, the municipality’s Code Enforcement Department noted that it had not previously been notified of the smoke detector issue, and called it the property owner’s responsibility to make sure they have active smoke detectors.

The house was condemned in June 2016 due to water shortages following the first fire, but this order was later revoked after the property owners renewed the water service. The municipality was again condemned in October 2019 due to water shortages, but this too was resolved later. Since the original condemnation order in 2016, code enforcement officers have conducted at least 46 inspections at the home – mostly of the condition of the external property and to make sure it is unmanned.

When the city’s Code Enforcement Division cannot voluntarily comply with a property owner regarding violations of San Jose’s building codes and areas, the department can take a number of additional enforcement measures, including a property owner’s fine of up to $ 100,000 or a public nuisance claim or receivership through an attorney. The municipality.

In this case, city officials chose not to take any of these steps, but Rachel Roberts, deputy director of code enforcement, said in a recent interview that they were “approaching the point” of continuing one of these ways just before the deadly fire.

“It was a very complex case,” Roberts said. “We don’t like to punish people. We try to get things to meet the requirements as much as we can.”

In an interview the day after the fire, 52-year-old Michelle Mestriana said she lived in the house with her boyfriend, Lawrence Jimenez and his brother, Leo Jimenez. The late father of the Jimenez brothers was the owner of the house and the property was tied up in court, according to Mestriana and the neighbors.

“We were looking for it,” Mastriana said, “but we tried to renovate it after the last fire.”