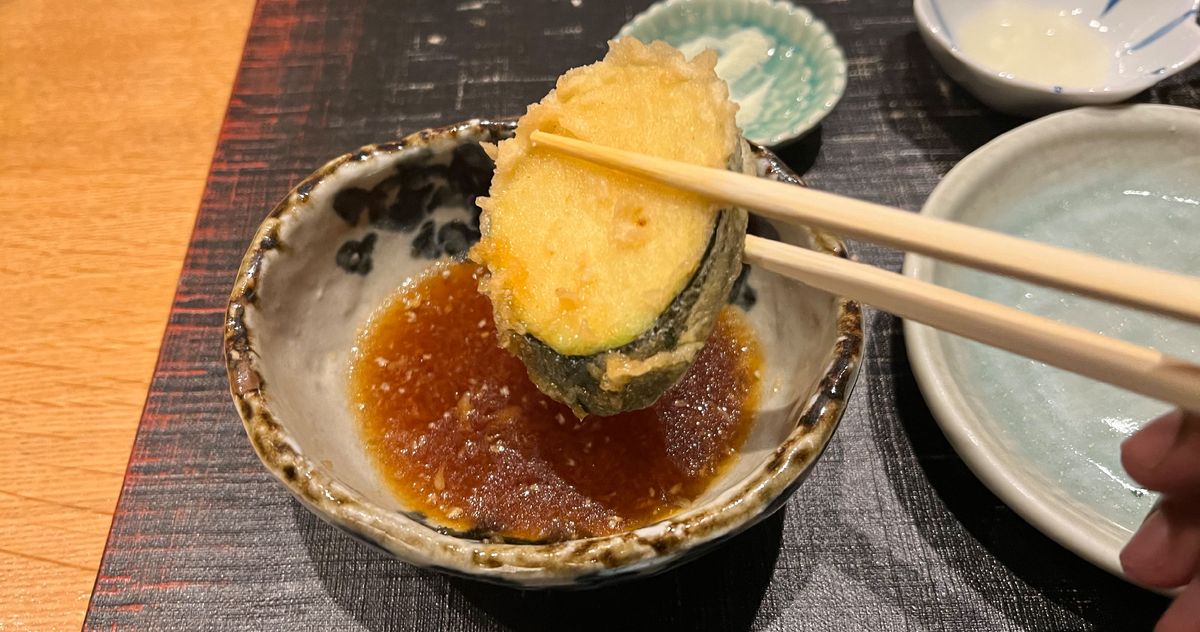 This article originally appeared on The year I ate New York, Newsletter about eating in the city, one restaurant at a time. Join here.

On Thursday afternoon, OpenTable showed only two tables available at Tempura Matsui, but when I arrived at 7pm, it was more or less empty. In my first move, I missed the entrance to the minimalist onyx structure, dwarfed like the attached luxury apartment. I knew I had finally found the Michelin-starred restaurant when I recognized, through the rain, the half-length curtain in the doorway.

I unloaded my umbrella with the maître d ‘, whose voice I recognized from our previous phone call, when I asked if they could contain a diner with a cancer allergy. (Yes, the answer was, as long as I did not mind a shared cooking oil, which I did not. I hope my allergist does not read it!) Then I entered the dining room, highlighted with grains of wood on the floor, ceiling and stalls: a vision of a cottage A bitterly cold Japanese cold right at the exit of the Midtown Tunnel. The seven-seater marble countertop, which surrounds the Tempura master workspace, I had for myself. The only other customers were a duo consisting of a young boy with starched pink oxford and a woman, I guess, was his mother, who finished the meal at one of the three tables.

The lack of customers was fine for me. I arrived at this restaurant in search of an intense experience after my long COVID week of delivery pies and steak meals by the table. The previous trips of the week were a celebration of a la carte-style meals that were missing from my diet for delivery only: fresh pasta, crispy duck breast, raw oysters, craft cocktails and wine by the glass. You know the atmosphere. Everything went through the recruitment, but I was still upset by the isolation, and I wanted a restaurant to pay attention to to me.

Naturally, Omkaza came to mind. What is more expensive than feeding not just course after course but bite after bite? Since I had never been to Metsui tempura, I decided that my delicious bites should come hot and crispy, fried to exact specifications in a blend of cotton and sesame oils a few feet away from my mouth.

Inside, there were only two servers working on the floor, the man who greeted me at the door and a taller, younger waiter in a white button and black vest with a name tag. They performed all the classic gestures, including pulling out my chair and helping me take off my coat, with a skill that felt appropriate for a $ 200-plus dinner.

I sipped buckwheat shuchu when the meal started with a few slices of amber sashimi and squid. “You should keep a piece of squid to eat with the shiso,” suggested manager D. What I did not know then was that these very precise instructions would continue throughout the meal: when a hot, swaying goose liver chwanmushi arrived, decorated with porcini, I was advised to rake it by turning my spoon straight down, as opposed to scratching. It is across the top of the liver flap.

Until my first pieces of tempura (squid) came out, a young woman placed her Louis Vuitton raider in the counter seat to my right and ordered an unfiltered cold green tea that matched her mohair sweater. I have already prepared my spices – according to the instructions – by mixing a ball of grated daikon into the tempura sauce and using a bird-shaped metal device to squeeze a lemon thread into a saucer. There was also a small portion of very thin salt.

Each of the dozen dishes of tempura came with its own instructions, all delivered by the servers just as the tempura – just one or two pieces at a time – was placed in front of me by the chef. The squid was good with lemon and salt, while I was supposed to eat the first of two asparagus pieces with salt and the second part dipped in sauce. The Japanese white came out a battered double, with the crispy little skeleton served on the side. The meat went with lemon and salt, “but for the spine, we only recommend salt.”

Halfway through, a young couple came in and sat down next to me at the counter. The guy ordered two diets of diet and two water, and he seemed disappointed to find that lobster was not available that night. “I heard the price of the lobster went up,” he pondered his not-very-chatty date.

Meanwhile, my meal progressed with a tempura salmon that appeared with a tiny serving of cold icing for icing. When the uni arrived, protected from the batter in a nori layer, I was told to raise the plate to my mouth while I was biting – to catch possible drips. Surprisingly, all of this instruction did not feel patronizing and instead constituted a welcome extension of the care clearly taken in cooking each bite; These people just wanted the best for me.

“Very hot,” I was warned about the zucchini, “but do not be afraid of the heat.” I hugged the workout, immediately gave it a quick transition in the dipping sauce and made sure to pick up a few pieces of radish just as I was told.

At one point in the night, Diet Coke leaned over and told me he was just in the “other tempura place” and liked that place more. I was grateful to be on the right side of the tempura partition, but also a little nervous that I did not know about the second place.

“Was it worth $ 200 for fried things?” A friend sent me a message when I took the train back to Brooklyn. I was tempted to write back that technically it was $ 200 Very luxurious Fried things, but I knew the food was just part of what made the meal feel worth it. Instead, I got to unload all decision-making on my own, to the point where I didn’t even have to think about when to add salt or squeeze some lemon on my food. For several hours, I did not have to worry about anything, and that, as it turned out, was exactly what I needed.

The year I ate New York

By sending your email, you agree to our terms and privacy notice and receive an email from us.