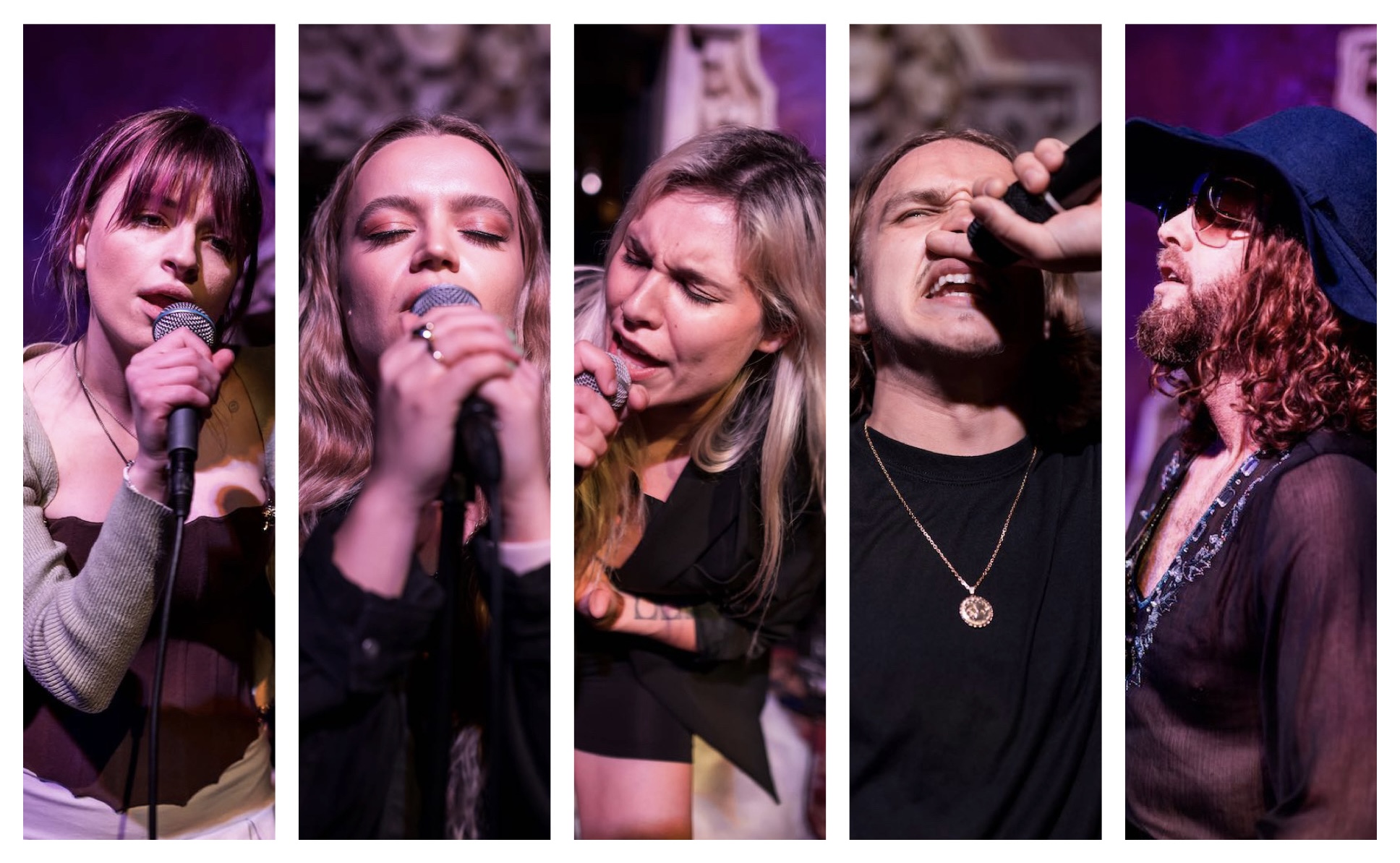 LOS ANGELES, Calif. – Since 2010, School Night has curated some fantastic ensembles featuring some of the world’s greatest artists when they were just getting started. Some notable names include Alt-J, Billie Eilish and Haim. I’m sure if you went down their list of graduates, you’ll find some of your favorites located somewhere between Gary Clark Jr. and Lizo.

It’s been a long time since I participated in the “It’s Night at School” show. Despite the epidemic and locks, at least 4 years have passed. Need some motivation to go out for a “school night” … even more so when this school night is Monday. My motivation for leaving the office early and traveling more than an hour to Hollywood on Monday that particular evening? talker. I followed her music for a while, recently got to meet her at an intimate “Backyard Concert” and performed to celebrate her new EP, In awe of insignificance. In addition, she has played in a bunch of backing bands for a lot of my friends in the Los Angeles music community. I think that was enough motivation.

I did not know any of the other acts in the planned lineup at all … but as School Night did in the last decade +, they brought their A game and did not disappoint. With a total of five performances on the staff (their first 5 night performances since the plague), it will be a whole evening of great music.

The first act to take the stage was Marissa Maino. When I did some online research following her performance, I learned that she was part of a pop-punk group that received a negative press in 2021. I will not bother to repeat this nonsense here because she did not commit any of this nonsense. These group songs and focused on her solo materials.

Marissa released an EP solo in 2020, Stages of love and heartbreak, And while her set included some songs from that effort, it focused mostly on the music she’s released in the past year including some songs that have not yet been released.

Backed only by an electric guitar, Marissa’s set really allowed the power and emotions of her singing to shine. I’m sure if she had a beating bass track and driving drums behind her, her performance would have been more kinetic, but a stoic standing at the microphone I think really allowed her to focus on supporting her breathing and gave her more opportunities to engage in an intimate audience with eye contact and facial expressions matching her lyrics. .

I was a big fan of her songs “Bitter” and “Jenny”. I could only imagine how great the song “Bitter” could have been in a live performance if it had been backed by a full band. Although she shook it off, I thought she managed to stick the strapped notes. I thought, “Man, if she had a full stage and she could really use her body to get into those characters, it could really be something.” As for Jenny, I actually preferred the abstract version over the studio tape (which I also really enjoy). The sentiment of the lyrics felt more serious as the layered voices and airbrush of the studio were removed, making the song more of an impact for me.

The next act to take the stage was Wolfie, who hails from Sari, UK, and is now based in Ojai, California. Although I did not know his stage name, I have a feeling I have probably heard some of his music somewhere, sometime, in my life. After all, I’m a pretty big fan of LCD Soundsystem, and Woolfy (at home, Simon James) was signed to James Murphy’s DFA Records.

Wolfie’s set caught me a little unprepared. His performance was a musical buffet of all different types of flavors. I know I should not do it, but I tried to point out its aesthetics … but it turned out to be quite difficult because it became something different with each song. One moment I felt these DFA vibes … and then I got a song with some psychedelic-folk vibe … and then some rusty root vibes when Wolfie and his band threw some calypso sounds … I even got some Jamiroquai vibes when Wolfy entered a mode game Reggae wind with a leash.

Clearly Wolfie is an artist’s master. He suggested on his social media that more new music would come. I would like to hear in what direction his vision is headed, and how everything will connect.

talkeraka Celeste Tauchar, and her new eight-track EP, In fear of insignificance, Is a fantastic collection of emotionally influenced, pop-infused indie rock. From the beginning, the opening song “Sad Girl” prepares the stage for the emotional outburst of frustration, despair and isolation that of course comes from a personal space. However, the heavy subjects contrast with the pulsating rhythms (except for the intentionally soft numbers) and catchy riffs so the subjects never take over. It’s a solid album, and if you’ve in the mood for some edgy rock / grunge melodies to sing (or shout) with in your car at full vigor, you can not go wrong with Talkers’ new album.

As for her performance, it was the first time I saw Celeste perform her own music with a full band … and boy … did she provide. The only other times I saw her perform were as part of another artist’s backing band, or acoustic solo. Although I thought she had a solid stage presence when she performed her acoustic set, she completely dominated the school night stage.

When she performs almost all the songs from the new album in order (except for her most laid back track “Little Bird” and did only a break of “My Meds” three quarters of the way in her performance), Celeste really managed to give her a star to shine, and let the music, and the emotion, flow from her Throughout the show. It was her side I had not seen before, and it was eye-opening, proved to me that she had the material … the music, and Stage presence … really taking a big step forward for her solo career. For me she needs to find a way to do a tour with a full band and let others around the country understand what I understood personally, up close and personal.

A few more things to note from the show: (1) Following on from the theme of “Speech”, she included in her set a whimsical cover of Talking Heads’ “Burning Down The House”, and (2) Daniel Murcia p / k / “Ex Manana” ( Formerly, El Manana), joined the stage for the track he produced, “IRL”.

It’s not that the room needed more energy after Tucker’s set, but that’s exactly what we got when Swedish – born Oliver Malcolm, who grew up in London, stormed the stage with his unbridled confidence and his jarring batting.

Man … I do not really know what to say. For me, this young man got it. The charisma. The mess. Endurance. The Bangers. I mean, all you have to do is watch his videos at the show … and watch the reactions of the fans in the audience while he’s performing. You were able to feel all this good energy in the room. The boy is a rock star.

As for the music, I felt it. If I understand this correctly, Malcolm started in the music industry writing and producing tracks for other artists. I could hear that experience in his music. The melodies and squeezing of genres remind me of all the best parts of some of my favorite music from the UK. There were some Alt / Brit Pop blur characters. Some idle-like punk. A little of everything and maybe even the kitchen sink … and I loved everything. It’s hard not to love the music when the performer smashed the show. Like I said before … this kid is a rock star.

Closing the evening’s musical meal was the charming singer / writer Charlotte Jane. I absolutely loved her performance … especially her voice. Of all the singers tonight, she mastered her instrument the most. The tone of her alto mezo voice was so rich, and the way she could flip into her head voice was completely effortless. And the runs? It makes it sound so easy. Apparently, she has some tour dates with Rag’n’Bone Man this summer, and after hearing her sing, I think Rag’n’Bone definitely made the right choice.

For this performance, she was accompanied only by an acoustic guitar. I, for one, would love to hear her voice in the midst of a full band. She opened her set with the song “Down Days,” and after hearing her studio tape after the show, I longed to hear her voice pounding against the horn of the segment in the chorus. The same goes for the single that premiered on this show “10 Percent”. I guess you can dance to the acoustic version, but I think the beating bass and drum tracks from the recording are what you really need to make the shoes shake. As a little treat for her fans, she got Jordan Campamp to join the stage for their collaboration “Reassure Me”.

Needless to say, I’m a little disappointed that Charlotte did not extend her stay in Los Angeles. I have a feeling it will be a short time before I get the satisfaction of seeing her in a live performance backed by a full band. Patience is a virtue I guess.