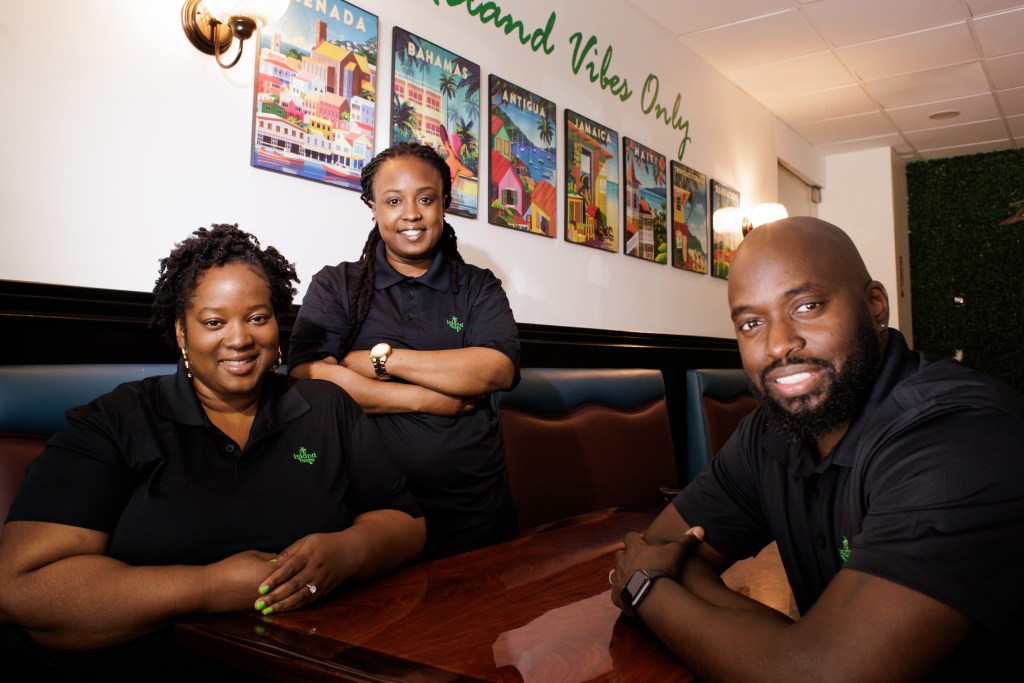 According to the trio behind San Jose’s newest restaurant, it has an atmosphere. “Think of Caribbean cuisine as equal parts to resilience, history, tradition and of course spices,” read their Instagram page. “This is how our people show love.”

Introducing this culture to a wide audience is the mission of Island Taste Caribbean Grill, which opened on Saturday in the heart of the city center, opposite the City Hall. This new place comes courtesy of Dorian and Mark St. Fleur, who are immigrant children (her family comes from Jamaica and his from Haiti), and head chef Imani Manning, a Jamaican native who had previously learned to cook at her mother’s Kingston restaurant. Starting a professional career in New York.

For the couple St. Fleurs had no intention of moving from their human resources and real estate careers to this cultural and culinary venture when they moved to San Jose. But they found the description “islands” does not mean for West Coast residents what it means for East Coast. In fact, they were surprised to find many They had never been to Jamaica, or the Caribbean, for that matter.and the cuisine of the West Indies was much harder to obtain here than in New York.

Within the plague, these cognitions sprouted into the idea. We were eager to hear their story from the Brooklyn to the Bay Area:

Q: How was the restaurant idea created?

Dorian: We first moved here with our daughter in 2019, when I started a role at Google in performing diversity, capital, generalization strategy. Just as we reached the furrow of life in the Gulf region, the plague struck. We found ourselves isolated in our home, thousands of miles away from all our friends and family. During that time my husband started teaching himself how to cook traditional Caribbean dishes by watching videos on YouTube. His goal was to make us feel less isolated and homesick. We loved what we built here, but it’s very different from our life in Brooklyn.

One day, he had a brilliant idea that we should open our own restaurant and bring a taste of the islands, along with our swag in Brooklyn, to the bay. The only problem: we are not chefs.

Q: So the third Brooklyn pawn to go west?

Dorian: Yes, so Mark offered his idea to a friend from New York who was a chef – Manning’s coach – and she immediately got on board.

Q: Master, what’s your philosophy as a chef?

Trainer: My passion is to tell stories through food, to use food to educate. Each dish has a plot line. I want to push this culture out. I’m not even considering myself a magician. I create. The kitchen is an empty canvas.

Mark: Our menu features authentic dishes made from scratch from Jamaica and Haiti, along with flavors from across the Caribbean. All dishes have a name that means something special to us. For example, our chicken dish is called “Bolt”, named after the fastest man in the world, Usain Bolt, who was born and raised on the island of Jamaica.

Q: How is Haitian cuisine different from Jamaica’s?

Mark: While both Jamaican and Haitian dishes include a mix of styles and spices from West Africa, native Taino residents, Spain and France, the taste profile of each country’s cuisine is pretty clear. Most Haitian dishes start with a green spice base called “apis” (meaning “spices” in slow Creole) which includes coriander, onion and thyme. Jamaican dishes, on the other hand, usually include base spices like green onions, ginger and pimento. Both Jamaica and Haiti, as well as the rest of the islands across the Caribbean, cook dishes that include rice, meat and vegetables, but what sets each country’s cuisine apart is the way local spices and preparation methods are combined.

Q: What are the distinctly slow dishes on your menu?

Trainer: Our menu currently includes two dishes. The first is called “1804”, which pays homage to the year in which Haiti became the first independent black republic in the Caribbean, when it fought successfully for its freedom from the colonial rule of France. The dish includes fried goat meat (called “tasso” in slow Creole) and black rice (“Dion Dion Dion”). The other is called “Bang Bang”, after a popular song in Haiti, which includes fried pork (“Griyo”) and white rice with black beans (“Diri Kole Ak Pwa”).

Q: If someone is opposed to spices, what is a good choice?

Trainer: While all of our dishes include a rich combination of herbs and spices, that does not mean they are all spicy. I think this is the biggest misconception about Caribbean food. However, if someone is uncomfortable with too much heat, he can try our vegan rasta pasta, oxtail or Eskovich whole red snapper fish. The really spicy item on our menu is the boob chicken.

Q: What do you serve for drinks and dessert?

Mark: Island Taste has bottled Caribbean drinks like champagne cola and pineapple soda, and traditional drinks like acid (Caribbean name for hibiscus) and lemonade from Haiti. While we do not currently have sweet treats on the menu, we are looking to add traditional island desserts like sweet potato pudding, grater cake and karma in the near future.

Q: What do you want customers to derive from the Island Taste experience?

Dorian: We want people to come for more than just food. Yes, the kitchen is what might attract people to Island Taste, but we also want guests to connect with our culture. We have works of art and music that speak to the heart of who we are. We can not wait to share it with the community.

Details: Open 11 a.m. to 7 p.m. Tuesday-Saturday at 225 E. Santa Clara St., San Jose. Find the full menu at www.islandtastegrill.com and the journey of Chef Imani on Instagram at yaadchef_45.