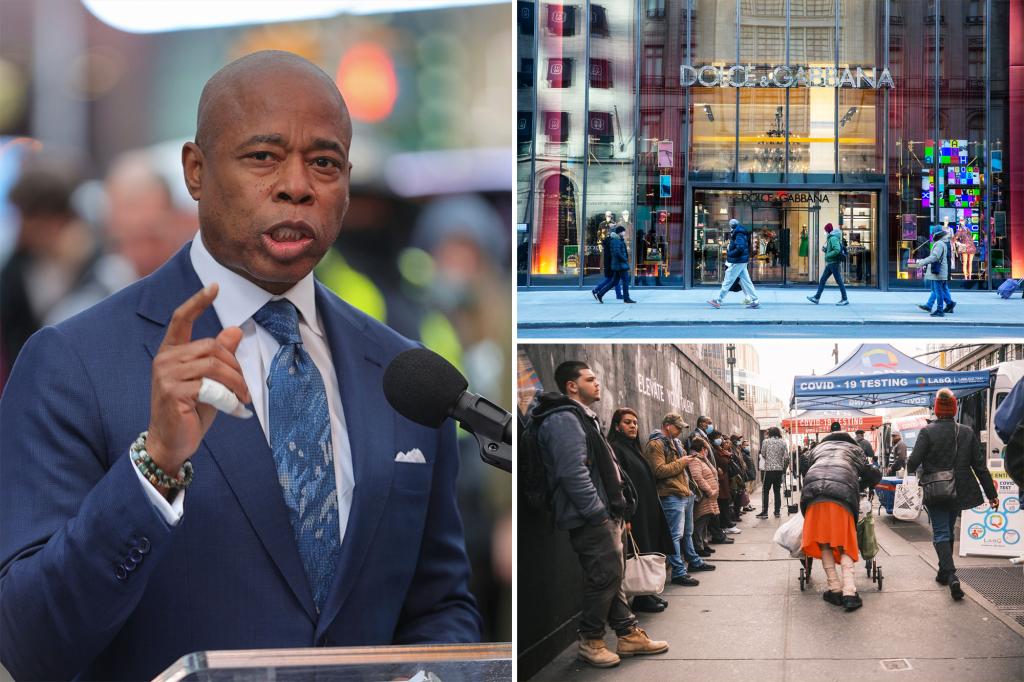 If New York ever had a moment No Panic, that’s it.

Our streets abound with people turning to work, shoppers, spectators of restaurants and shows, motorcyclists, joggers and groomed grooms in numbers we have not seen for more than two years.

But with viruses across the city approaching upward at a mutilated rate, it didn’t take long for the “can’t let our guard down” machine to start gearing up. Mayor Eric Adams extended the mask mandate for ages two to four; Colleges have restored the mask rules; Health officials warn that the city’s “yellow” (low) level of risk will soon turn orange.

Now Adams himself has caught the bug. Let’s hope and pray that it does not dilute his long-held view that the city should continue with it and “we must learn to live with COVID.” (He looked and sounded fine in Tuesday’s taped post about the Brooklyn subway shooter, and he did a slew of remote TV and radio interviews afterwards.)

What a disaster it would be for Adams to return to it (as he has done on other occasions). The city is really back – mostly. Even office space, which is dragged after returning to stores, restaurants and theaters, continues to tick upwards.

It reached 38.3% this week, according to a widely-observed Kastle Systems job barometer, which measures hundreds of office buildings in the city.

If it’s lower than what the owners want and need – and it certainly is – it’s beating the physical occupancy of 23.6% that Castel followed in mid-January. The trend seems to be on the rise inevitably, despite media concerns about another wave of Corona virus.

The New York Times may prefer the epidemic to last forever. Nothing has ever overcome the bug to empower micro-government management of business and social order, let alone individual life.

The newspaper warns us every day of the risk. It’s obediently paralyzed to any prosecutor who reminds us, “We may have finished with the virus, but the virus did not end with us.” The last mouthpiece was City Comptroller Brad Lander, who tested positive last week.

But the health care system and politicians who sound nostalgic for a three-month lock that brought the Big Apple to near ruin in 2020 show an interpretive disregard for the plague’s more enlightened perspective – that the severity of cases is far, far more important than numbers.

Many countries, even some of which have increased broadcasting, have logically stopped updating the number of cases daily. But not New York!

Even Dr. Doom himself, Anthony Pauchi, advised on ABC’s “Week” issue when corona cases in the country peaked in January: “As progress and infections become less severe, it is much more relevant to focus on hospitalizations versus hospitalizations. For the total number of cases. “

Well, what does such a focus show?

The city’s health ministry says Omicron – driven cases appeared around 600 a day in early March. Since then they have steadily risen to 1,981 new cases recorded on April 8th.

However six weeks since the “wave” began, hospitalizations have actually passed got off. According to the DOH, hospital cases that were in the low 40s for the day in late February dropped, for whatever reason, to the 20s to mid-March – where they remained in April.

Yes, hospitalizations are a “retard indicator.” But they are not retarded for two whole months.

The deaths that were, mercifully, low (below 15 per day) in early March, today, mercifully, are even lower – below five a day during the past week. This is in a city of 8.3 million people.

Only two deaths were reported across the city on April 8th. Given that not everyone may have registered for a few days later, would anyone expect the final figure for April 8, 2022, to approach the 771 deaths of April 8, 2020?

The reasons, of course, are a widespread vaccine, which powerfully protects most people from the virus’ ability to harm health, and a relatively weak virus strain that destroyed the unvaccinated millions in the first terrible months of the epidemic.

In every way, our big city looks and feels more like its old self despite the alarmingly rising crime rates. The apartments from which many fled two years ago are in demand today until the talk is about scarcity and not about abundance.

This is not the time for a rise in Corona virus cases – so many moderate that they would not have taken me out of a high school gym class – to blunt our progress. Adams must stay firm in his vision for the city to continue to move forward, no matter how much heat he receives from fearful “experts”.