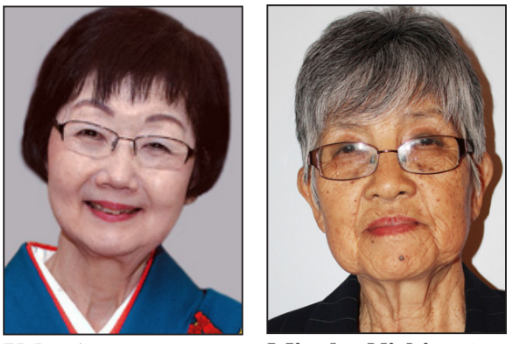 The Los Angeles Downtown branch of the American Citizens’ Japanese League and the Southern California Women’s Association have selected two notable Japanese community leaders for the 2022 Women’s of the Year Award: Yoko Avia and Yoko Nishimoto.

Yoko Avaya was born in Tokyo in 1941. She started studying Koto at the age of 13, and Giota-Sangen at the age of 18. She received her teaching certificate and a master’s degree from Koto’s Michio Miyagi School in Tokyo. She moved to the Los Angeles area in 1965, and continued her studies with Madame Kazu Codo.

In 1974, Awaya formed its own group, Awaya-kai. In 1994, she founded the Yoko Avaya Koto Conservatory of Music, a non-profit organization dedicated to the Japanese musical arts of Koto and Giota-Sangen.

Over the past 50 years, members of Awaya and Awaya-kai have made many cultural contributions to the American Japanese community and the musical arts. Their first concert was in Gardena in 1976. They performed at the Dorothy Chandler Pavilion, Japan-America Theater, Armstrong Theater, USA-Japan Expo, Los Angeles Museum, UCLA, USC, Getty Center and Japanese Garden, San Conservatory of Music Francisco, Mackie Auditorium in Colorado, University of Colorado in Boulder, Lafayette College in Philadelphia and Jacobs Philo in Massachusetts.

In 1994, Awaya-kai received a grant from the E. Nakamichi Foundation of Japan to produce a special concert of “Baroque Music in Koto” at Torrance.

Awaya has also appeared on radio, television and movie soundtrack, and has prepared studio recordings for Walt Disney World. Awaya-kai has given numerous charity appearances, such as for Keiro Senior Healthcare of Los Angeles; Makoto Takenaka’s charity jazz concert at the Marsee Auditorium and Okinawa; Annual Birthday Party at Kei Ai / South Bay Keiro (1994-2019); A charity concert by Ukraine and Koto for the Fukushima children at Torrance (2013); Tsunami disaster relief project at Japanese Garden Earl Burns Miller in Long Beach (2011); Awaya-kai charity concert for the Kumamoto earthquake in Torrance (2017).

Awaya and Awaya-kai have received awards from the Southern California Japanese Chamber of Commerce, Nanka Kenjinkai Kyogikai, the Orange County American Cultural Association, the California State Assembly and the City of Torrance.

Miyoko Nishimoto was born in Fukuoka and grew up in the city of Ureshino, Saga district. Upon the death of her parents, and at the urging of her sister, she moved to the United States in 1970. Within six months she received her driver’s license and began working for the Voit Rubber Company in Santa Anna. Two years later she left her job to concentrate on raising her son, Nick, and her three daughters, Kazumi, Maiomi and Rubber, and she also helped her husband, Kazuhiko, with his business.

In 1977, Nishimoto returned to work. She worked for the United States Marine Corps Brigade K2 for two years; Again she was the only Japanese-speaking worker. Following her work at the Navy Station she opened and operated a cafe.

The Orange County American Association (OCJAA) was established in 1986, and while attending one of its many events, Nishimoto decided to become more involved as a volunteer. In 1987, she trained for three months in Little Tokyo under the guidance of Yasuko Sakamoto and upon completion of the course, began volunteering in the office every week.

In January 2009, after living in the U.S. for 39 years, Nishimoto proudly became a U.S. citizen. Currently, she is assisting her husband in his business and taking time to enjoy her family. She has seven grandchildren, ages 10-21. She helps pick up and drop off during the week.

Tickets cost $ 45 for an adult and $ 25 for a child (ages 10 and under). Indicate if vegetarian is requested. The deadline for bookings is April 16th.

Registration begins at 12:00 with no gifts please. Seating arrangements are made at tables of eight. Check downtown LA JACL. Mail check and list of attendees to Amy Tambra, Women’s Chair of the Year, 526½ W. Riggin St., Monterey Park, CA 91754.